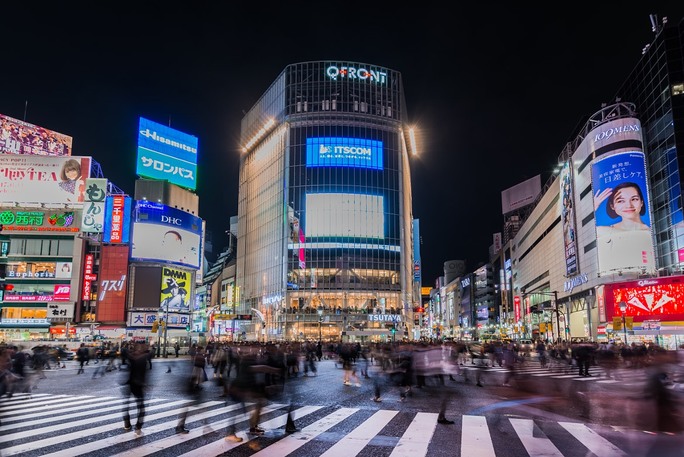 I was walking home from the supermarket in my old neighborhood of Sasazuka one time, and I saw an adult woman on a bicycle run directly into a roadside barrier with a fleshy thud. It's one of those white railings that probably cost tax payers a fortune, but are supposed to make pedestrians safer. Actually, i'm pretty sure it was this exact railing, but I digress.

I distinctly remember this because at the time, I had just moved to Tokyo, and my reactions were still in English. I let out a pretty audible "oh shiiit!" as she did a slow motion tumble to the ground and the people around started looking at me like I was the weird one, not the adult who ran into a highly visible stationary object.

I've seen people run into each other, blindly step out into the road in front of cars, swerve for no reason while walking, and most infuriatingly, step onto a train just before the doors close and stop directly in front of the door which makes the next person have to decide if they want to be a decent human being and wait for the next train, or lower their shoulder to clear a path.

I'm pretty sure even Japanese people know that it's a problem, since some hero removed the bell from his bike and filmed himself using it to move people out of the way who fan out like a football team's defensive line to block sidewalks. Interestingly, the comments on that video say things like "Haha, funny that it worked on a escalator and in a store! Such considerate people" which completely ignores the fact that everybody is frickin' blocking the sidewalk in the first place. I'll have to tackle the fact that Japan has an undeserved reputation for being polite in another post.

Anyway, my new-year's resolution this year was to not complain about Japanese people walking for an entire year. The calendar hadn't flipped to January 2nd, my friends, before I broke that resolution.

I have to walk through one of the busiest stations in Tokyo on my way to work every day, and I'm fairly certain at least half of the people that pass through this station woke up with the express purpose of ruining my day. I would give the old people a pass, but in Japan, the old people are everywhere. I got on a train in the countryside once that was full of gray-haired elderly folks, and my friend said "it was good knowing you guys. It looks like we've just gotten on the train to the afterlife." True story.

So, as the city's self-proclaimed leading critic of Japanese walking etiquette, I've come up with a theory.

People that grow up driving cars know not to swerve in their lane, cut people off, or expect others to get out of the way. People who forget are reminded by fellow drivers through helpful gestures like the middle finger, or perhaps a long string of profanity carried on the breeze.

So here's my somewhat racist, and only possibly accurate theory.

I developed a sense of group motion through riding in cars every day, and later driving myself. It strikes me as odd to not look over my shoulder before I turn while walking, because I wouldn't do it while driving. The worst that happens if you're waking is a slight bump, and the worst that happens when you're driving is a crumpled mass of flesh and metal, with your relatives and friends crying at your poorly attended funeral.

The moral of this story is: don't stop in front of the ****ing train doors when you get on the train, people!

And next time somebody cuts you off on a sidewalk in Tokyo, don't hold it against them. It's not their fault, and it's still way better than walking in Korea.

A daily struggle. This one really resonates. Interesting theory about the Japanese inability to navigate successfully due to lack of driving experience.

The theory may or may not be correct, but it helps get me through the morning commute without punching anybody.