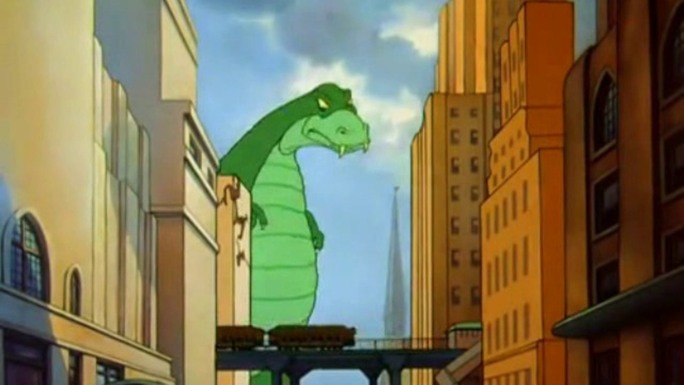 I was watching a video about the original Fleischer Superman Cartoons from 1942, as one is wont to do at a job with ample free time, and I was kind of amazed at the quality of the episodes. Apparently these were pretty ground-breaking animations at the time, when cartoons were still considered childish and nobody had really used the medium for adult-targeted themes. They created the "Superman can fly" idea just for the series, and I imagine many of the other superhero tropes as well.

There's an episode called the Arctic Giant, and you immediately notice the slack-jawed likeness of Godzilla in one of the episodes. As any red-blooded American would do, I checked to see if this shit was stolen from the Fleischer brothers to make Godzilla.

It turns out, Godzilla wasn't created for another 12 years in 1954, and it would be hard to imagine that it wasn't, shall we say "a derivative work", of the Fleischer brothers' Superman monster. I'm not saying that it's definitely a copy, but if it walks like a duck and quacks like a duck, it's probably not an original creation free of intellectual property violation.

Anyway, you take things like CPUs, radios, transistors, cars, curry, western clothes... what makes the Japanese so good at taking things and personalizing and arguably improving them?

When I think of copying stuff, I generally think of crappy remakes. Like the American version of "The Ring" movie. Americans are pretty good at stealing other people's ideas, too, but I think we tend to just steal actually people. A lot of our most famous artists and inventors are actually first generation Americans, or naturalized citizens - Elon Musk might be American, but he certainly wasn't born in America. I digress. What makes the Japanese so good at copying things?

If you live in a society where almost everything must be done within circles of responsibility of varying size, I imagine it's pretty hard to get a project funded at any company unless it has a proven track record. Taro-san from the design department might have a truly game-changing idea about a giant monster that comes up from the ocean and destroys the city, but it's probably easier to get the 120 year old head of the company to fund the project if you can point to an extant successful example.

So is creativity a sad victim of Japanese bureaucracy?

Then again, there just aren't that many creative people in the world. Maybe the tweaks and tinkering are just a part of Japanese culture. Maybe creativity manifests itself in the land of the rising sun as the ability to add great features to existing ideas.

But then you remember that Pico-taro invented the song "pen-pineapple-apple-pen" and you realize that Japanese people are actually pretty good at being creative at times. Even if it is an exhibition of formulaic Japanese comedy.

I guess everybody is creative in their own way - my way is my ability to create new ways to be critical of these cultural differences.