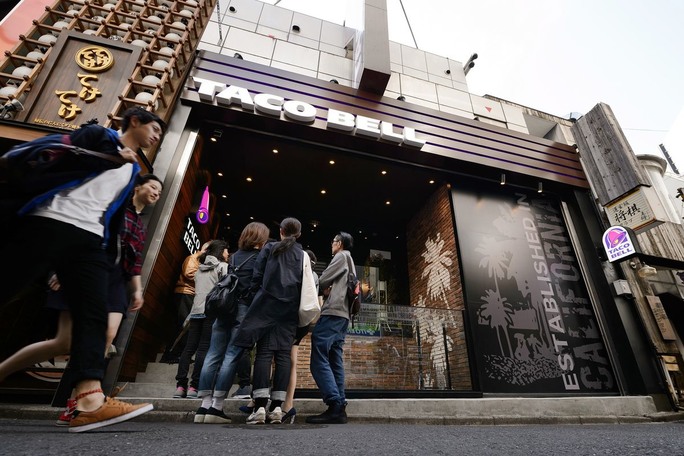 I used to often ask myself "self, do you even want to live in Japan anymore?"
But recently i've figured it out.

You might not want to know, but there's no Digiorno's pizza in Japan. I'll be honest, I don't even know if there's Digiorno's anymore in the States, because I haven't had a frozen pizza since i've come to Japan. But there's definitely a frustrating lack of Digiorno's in Tokyo.

There's no real rhyme or reason, but periodically I find myself on my couch, eyes unnaturally wide, usually drunk, and fiending for a Digiorno's pizza. Mind you, I don't even think I ate Digiorno's when I lived in the states, but that's one of the side effects of living in Tokyo for too long. Sometimes I feel like I need some random heart-stopping food, and the fact that I can't get it only makes me want it more. Let's call it my Taco Bell list, because I first noticed it one night while fantasizing about a 7-layer burrito at some ungodly hour. The number of things on my Taco Bell list has gotten significantly smaller now that I know where to find most American products in Tokyo, and Amazon can usually supply the rest at a price. But there's always something you wish you could have, deodorant, toothpaste, Tex-mex, Founder's beer, or maybe fresh fruit that doesn't cost your firstborn child.

Sometimes a person will ask me "do you like Japan?" and my initial reaction is to blurt out "you mean this concrete wasteland that can't even scrounge up a Digiorno's?"... before my good sense kicks in and I mumble something about loving sushi and onsen.

Why can't I scratch my Taco-Bell-shaped itch with a Chu-hi Strong supersaturated with sugar, or any of the other things I can't get back home? The mind boggles. But with the wealth of technology, activities, and great people that Tokyo has to offer, I end up spending way too much time concerned with small issues. Why can't I get a frickin' frozen pizza for $5 in this city? Why does everybody say that the trains are so punctual when my ride to work every morning is late literally half the time? Why can't old people head-check before changing proverbial lanes whilst walking? Why is it always slightly too hot in every building or train during the summer?
Sometimes you just have to wipe the sweat off your forehead and realize that no place is perfect!

So in the end, i've come to realize that whether or not you want to live in Tokyo really depends on how well you can deal with minor discomfort. Nothing huge like a gunshot to the chest or stepping on a lego, but minor discomfort like being unable to fit a Digiorno's pizza in your oven... because you can't get Digiorno's.. and nobody can afford to own an oven in Tokyo.

I will definitely write something later about how bad people are at walking here. Trust.

I've never had a Digiorno's Pizza, but I will say this... Not having an oven in my house, has been my second biggest frustration with Japan.

Glad to hear i'm not alone!