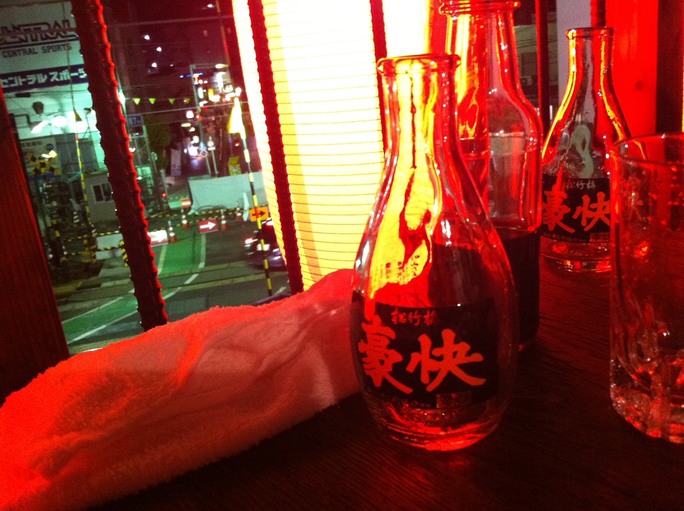 I've been eating, drinking, working, and just generally living in Tokyo for the last 7 years now. I've grown accustomed to most of the minor inconveniences of city life, and most cultural differences don't bother me too much any more. I shuffle through Tokyo train station every morning on my way to work, just a black face in a sea of salarymen with holes where their youthful spirits used to be.

Decades of working in environments where any flickers of creativity and skepticism are stomped out has an effect on everybody's psyche, so I don't think anybody is particularly surprised. Some gifted artist, sitting through a meeting about company loyalty and the latest numbers. Some high school baseball star, struggling through morning radio calisthenics with their coworkers.

One way that Japanese culture not-so-gently pushes people toward social homogeneity is through sculpting the way people think. Japanese kids are taught from a very young age that they are members of a group, and that success of the group is more important that individual success. Shame brought on one person is shame brought on everybody. Many people think this is a good thing, so I suppose it's subjective.

I work in one of the middle floors of one of the largest skyscrapers in Japan. I'm in a Japanese office where Japanese employees outnumber foreigners 200 to 1, so I like to think I have a chance to see Japanese people working in a Japanese environment.

So believe me when I say, the average Japanese person can't explain any idea, problem, or solution with any efficiency. Believe me, there are very smart people in my office. I'm definitely in the bottom 10% when it comes to degrees and education, but trying to get anything done makes me want to shoot myself in the face.

Let's pretend for a moment that there's a problem, and an American is trying to explain that problem to somebody else. They would most likely start with a quick summary of the problem, follow that up with the reasons why it's a problem and how it was caused, and at the end maybe even offer up some potential solutions. At any point during this conversation, the listener might say "I've heard enough" and cut them off, since the impact of the pieces of information generally gets smaller as you go on. I'm not saying that this approach is better than the Japanese way, it's just different. We start with the big stuff. Here's an example:

A: I need to take work off tomorrow. My son is sick, and I need to take him to the doctor.
B: That's terrible, is he okay?
A: We hope so! He's got symptoms of a cold, so we'll see.

Aaaand cut. That's pretty normal, right? But for a Japanese person, the order would be reversed.

And that is how you talk like a Japanese person. It doesn't matter for small things, but if you live here long enough, you quickly realize that it doesn't work for any non-trivial topic.

Tell a Japanese person that they have a rapidly declining population, and they'll spend the first 60 minutes telling you about the history of Japan and every possible social factor that may be contributing to the phenomenon..
Ask a boss a question about changing a routine, and they'll gather a ton of tenuously related background information from tenuously related co-workers, and form a consensus.

It actually sounds kind of beautiful. There's a teamwork sort of thing going on. It's got that hippie feel to it. I like the idea of a system where everybody knows what's going on.

But then I thought, oh my god, no. Sometimes I would rather just get shit done and go home early.

Life in Japan is full of these little quandaries. Every silver lining's got a touch of grey.

We sometimes tend to put too much information to explain one thing, because we dont know if japanese people understand or not as their face give us nothing to go by :b.

I think it's a really friendly way of explaining things, it's just really annoying when people do it at work. haha