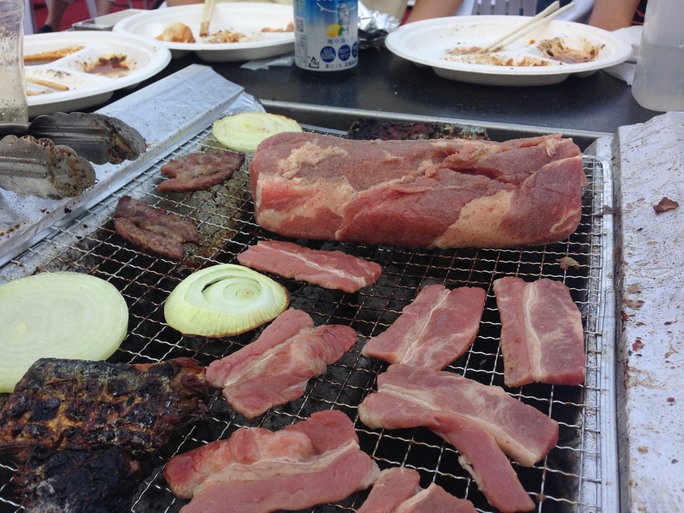 I thought that I was allergic to Japan when I first moved to Tokyo. Within a week or two, I noticed a constant sniffle and itchy throat, but I assumed it was just some advanced stage of a hangover. A carefully curated supply of over-the-counter drugs has pretty much solved most of these inconveniences - but there's no medicine for sweating your balls off.

I always manage to forget how hot Japanese summers are when it's any other time of year. I think of the camping trips, the BBQs, and the beer gardens, but somehow I manage to push the oppressive heat out of my mind.

People see pictures of the salarymen walking to work like a scene from Reservoir Dogs, and they assume that suits are appropriate attire for the Japanese climate. They fail to realize that people in Japanese society will do anything if it appears appropriate, regardless of whether it's actually necessary.

By way of an example, the first time I played basketball in Tokyo, I stepped into the gym and was blown away by all the flashy shoes, big baggy hip-hop clothes, arm sleeves, and general abundance of accessories. I thought to myself "holy crap, these 5'6" asian T-pain looking mother f****s are going to destroy me!" When we actually started playing, it became obvious that they were inexperienced players at best, and touching a basketball for the very first time at worst.

But that's how it goes on this side of the pond - you dress the part. If you're playing basketball, then you need to have big baggy shorts, and appear as close to a caricature of an AND1 player as possible. If you're playing golf, you dress up like an asshole with those stupid socks and one of those ridiculous hats, because that's the image you have in your head.

Well, "working" as a man anywhere outside of retail in Japan means you're probably wearing a suit or a uniform. Unfortunately, the reality of the situation is that it's frickin' hot and HUMID in Tokyo. This article about preventing heatstroke at the 2020 Tokyo Olympics mentions that it got to 35.5 (95.5 Fahrenheit) in July, which isn't even the hottest month (it's August).

The human body starts to sweat when it gets too hot. Japanese people like to be sweating or on the verge of sweating at all times. A quick glance around the train on a summer day will usually find about half of the people with drops of sweat running down their faces. Most westerners are not going to be used to sweating during normal day-to-day activities as much as you will in Tokyo. It's mildly disgusting an endlessly frustrating to be pressed up against some stranger on the train, only to find traces of their sweat on your clothes when you finally peel yourself off them when de-boarding. So here are some helpful tips for trying to stay cool during the offensively hot Tokyo summer.

If you're undaunted by the prospect of an electric bill propped up in the sky by your air-conditioner and big enough to support a normal family of 5, then I recommend just staying home for 3 months while the heat wave passes.

Run from Combini to Combini

You can't throw a rice ball in Japan without hitting a combini (convenience store), so you might as well just step in to every single one and read some magazines for a few minutes. Possible downsides to this strategy are increasing your commute time by roughly 1000% and increased discretionary spending.

Expecting people to wear suits to a desk job where you never face customers is the Japanese norm, but luckily we're not Japanese. Rock a polo shirt, go crazy with some socks-less footwear, throw on some khaki cargo shorts and offend both fashionistas and your boss. The world is your oyster.

In Japan, water is traditionally served without ice cubes. This has started to change at restaurants lately, but if you want to refresh yourself quickly, nothing beats the semi-frozen liquid happiness known as ice cream. Possible downsides to this strategy are increased happiness... That's the only downside.

In retrospect, that list is really not very helpful, but the important thing is being prepared. Be ready to take a shower more than once a day. Be ready to hit the beach on the weekend to escape Tokyo. Be ready to binge watch Madmen on Netflix - my current strategy. Every foreigner deals with the heat in their own way.

Think cool thoughts and be prepared my friends!